For the month of April, which is national poetry month somewhere, I am exchanging poems with a friend every day, using a little of the previous poem in the next. This means sometimes using odd automatic or found-text style tricks like using translation tools, or breaking up a line and writing out from each. The thing that these techniques have in common is that there is a creative element in the curation and laying out of lines, rather than a generative effort.

Which is where we come to Love, bring myself by Dominic Leonard (Broken Sleep Books).

Dominic has plucked lines from the Mystery Plays (a series of medieval plays all performed on on day across the city of York in celebration of Corpus Christi) and arranged them into a series of sort-of-sonnets, take a look: 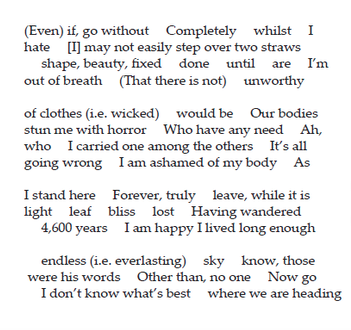 Naturally, as whenever we rip apart a text and start gluing it back together, we understand that in the reconstruction there is a new meaning formed. Often we can obsess with this idea of destruction and recreation to mean something else, because it’s a bit punk – like paving over another meaning with this new one.

The poems are smart, fun things to pick at, trying to find the person being addressed. But it is impossible to escape the text that you are working with – here there is a pleading tone, which comes from the prayer aspect, the heat of wanting something lives throughout – and even “our bodies stun me with horror” rings out with biblical shame.

The poetry is staccato of lists where each word pulls away from its neighbours, sometimes leaving something interesting between.  Everything like this is in the translation – the reference to Job 10:21 sent me looking for the line, which can be translated variously for different purposes and I suppose is the point of the work, to find a new way of breaking and seeing the texts with a new found personal intimacy away from the medieval crowds.

Pick up Love, bring myself from Broken Sleep here.

Love Takes Risks is the wonderfully named symposium on the poetics of contemporary small press fiction. There are recording of the symposium up on the website here.

I really recommend to all of you who have heard or read my endless chatter about Claire-Louise Bennett’s Pond to listen to the very articulate Liam Harrison compare the work to Beckett in a way that really cuts through to the bones of what makes it great. ~~~
This is a very jolly poem by Carolyn DeCarlo called The Ultimate Freedom of Space and Time, which includes the lines: “My house traveling to France in 1778 to have sex with Marie Antoinette after meeting her on the internet.
My house sitting at the end of Marie Antoinette’s bed while she sleeps, telling itself the story of their lives together.”

I think I have a poem out somewhere, oh, here: Essay on Biophilia published in Peeking Cat.

I have so many Jiffy bags now from all the lovely people who send me books that I feel like I have no choice but start a small press. Sadly we are closed to submissions at this time. Thanks for reading Etch To Their Own – I think I am going to move the archive to my website and away from Medium at some point soon, as it seems like it might be better to actually use the site I pay for or something? This is a nice object from Guillemot Press.

Another Last Day by Alex Lemon is a kind of self-apocalypse in a way we’re all familiar with — the sense that yes, this is all going to end and there’s not much to do about it, so taking an affirmative stance on the end of the world is the closest thing to satisfying control we can achieve. It’s almost auto-accelerationist in a way, as if the coming end for the self would spur others on to making a better set of choices for the future. If only it would get so bad that I could be immolated martyrly everyone else would really have to take some action — a little like the rising sea levels, we all know that once we have a flurry of eels around our feet in the local Waitrose someone might actually think about doing something.

Here’s a couple of snippets:

Alex uses a tone that isn’t unkind. This isn’t suicide poetry. There is self regard, while saying “I am tumbling king” is an undercutting, there is the acceptance of some kind of grandeur about it — even if distant, unrealised and unearned. The language and that presentation of ideas that run against one another (like kenning, discussed here) to form another meaning, like: “a flowering fist.” This could be a fist (a violent symbol of strength, power, etc) flowing from a clenched bud to an open palm (expressing honesty, openness, friendship). Equally when a plant flowers is it taking part in the most vital part of its existence, it is achieving much of what its life is about — and as such — this could be translated as a fist archiving its purpose, arguably to be thrown. Of course, some of it is just undeniably poking at bits of my brain with a candy cane, like:

There’s poems later of bodily destruction, and not just the death of the conceptual self — being eaten by fish, being drown and made soft by the water so the flesh will hold any shape. These passages show the tenderness of all Another Last Day, that despite the early sense of accelerationism, the body is still present and our main way of expressing our weakness.

M S Merwin died recently — and if you’re like me you’ve probably only heard the name before in reference to his studies of Ezra Pound in passing. If you’re not like me you may not have been introduced to Merwin’s work until the last couple of weeks where there has been a collective outpouring of his very good words across twitter.

In this interview in the Paris Review we learn about how the deep ecological stance of his work is influenced by his sense of powerlessness in childhood, with the obvious parallels in the world’ paraylsis on inevitable ecological catastrophe.

There is also a nice part on the problems of liking Ezra Pound, explaining the difficulty of trying to enjoy the Cantos as an intellectually coherent piece.

This interview with Mike Corrao about his very weird work from 11:11 Press, Gut Text explores the differences between film and literature in a way that doesn’t just crunch down to the argument of “it’s all art and thinking right”

It also covers the power of skimming, which is an interesting thing for a writer to want from their readers. It could be thought of a lack of engagement, but because of the comparison to film here there is an idea of passively taking something in and letting it process behind the scenes later.

Thanks for reading Etch To Their Own, the written version of taking me to the pub with books in it. The me in the previous sentence? That would be @CJEggett. The best thing about that M S Merwin interview above is that I discovered that he lives in Hawaii in a place called Hai’ku — which is a fun place to live in one of the smallest states — we assume there’s three streets and the one in the middle is a bit longer than the other two. Sammy sent me this, which is in part an incredible poem, part a note on all the times she had to pick up orphaned sentences for me. Speaking of Sam, can you help her find this poem? This is a great title for a poem, and it delivers. I do really like the crossing out in that last one. Possibilities are a set of lies created by destiny — but that doesn’t mean we shouldn’t try to find the most fun lies to enjoy together.

I have been feeling particularly full of life this week, and very grateful for it. You can come across some good luck and find yourself being suspicious about enjoying it or acting on it, but I am glad that I have people around me who gently guide me back to more gentle places in my own head where I do the right thing. This, then, is a bit of an exposure of myself. I used to love this poem when I was a teenager. I think I used to tell people it was my favourite. I’m a long way from there now, but for some reason it wandered back into my head. It’s Some People by Charles Bukowski.

Here it is in full:

Some People
some people never go crazy.
me, sometimes I’ll lie down behind the couch
for 3 or 4 days.
they’ll find me there.
it’s Cherub, they’ll say, and
they pour wine down my throat
rub my chest
sprinkle me with oils.
then, I’ll rise with a roar,
rant, rage –
curse them and the universe
as I send them scattering over the
lawn.
I’ll feel much better,
sit down to toast and eggs,
hum a little tune,
suddenly become as lovable as a
pink
overfed whale.
some people never go crazy.
what truly horrible lives
they must lead.

It’s embarrassing obviously. But Bukowski sometimes had the joy of simple kindness. In the same way his work is filled with the terror of pettiness — his sense of smallness of self which drove those nastier poems is the same thing here which give us the idea of needing the help of others to become the better version of himself.

That help is a kindness too, in this poem he’s some kind of misplaced cherub that simply need to be jollied into existence again. The energy of revival here is one where he sends those who revive him scattering across the lawn, which suggests a kind of gnome-strewn lawn after a storm to me. The love he get from those around him hinges, he says, on the fact that he has gone crazy and lies down behind the couch for a few days. He knows that this tenderness is about putting him straight, so he must cultivate his wonkiness. The things that is missing from this poem is gratitude for these people floating around the poet and point him in the right direction — which is why it is something that I could love as a teenager, but feel so alienated from now, while I also reliant on people pushing me towards the better things I should be doing.

It wouldn’t be an ETTO without mentioning Sam has another poem (called Twitch) out somewhere (Thimble), it’s pretty heavy.

This week’s song is All The Wine by The National. Because I am feeling very good about the world.

Thanks for reading etch to their own. I’m really thankful that you’re reading this at all. There’s a lot people around me who make it vaguely possible for me to be better than I currently am. If I was anyone I would be @CJEggett. I have to say it has been a good week. I have a new job that is a little closer, a little better paid, and tickles part of my brain the in way that other jobs might not. It’s sad to have to leave all of the lovely people I work with at the moment of course. I’ve not read much this week because I’ve had too much energy and felt full of too much blood. As a little bonus I was given this by someone and love it very much.